St Teresa of Avila : The Way of Contemplative Prayer

To make a start, a keen sense of challenge must fill those aspiring to grow closer to St. Teresa and her method of praying!
In the last chapter we ended by mentioning Prayer of the Heart, or to give it the other names by which it is known: ‘Contemplative Prayer’ or ‘Mental Prayer’ or ‘Silent Prayer’ or the ‘Jesus’ Prayer’. St Teresa is perceived by the universal Church as a Mistress of Contemplative Prayer, and of prayer life in general. This was Pope Paul VIth ‘s intention when he declared St Teresa ‘Doctor of the Church’ in 1970, in particular as in most of her books she talks about ‘Contemplative Prayer’. What, therefore, can she reveal to us concerning this form of prayer ?
The Prayer of the Heart embodies the core of her new life in Christ after her second conversion. She is now more constant in practising it, plus, she is very vigilant in practising the virtues. In fact, in a decisive confession around the time of her conversion she received a piece of excellent advice from a knowledgable priest: first, to lay a solid foundation for her practice of the Prayer of the Heart, i.e. to practise virtues as we will be seeing in the coming chapters.
Before her conversion she had read the Third Spiritual Alphabet of the Franciscan Francisco of Osuna (1497 – c. 1540), where he speaks about the method of recollecting ourselves while praying in order to get closer to God and receive his Grace. But one has to say that without her conversion, the practice of the Prayer of the Heart was impeding the divine waters to gush forth from the fount of its source, and therefore she was left to rely almost solely on her own strength. However, the reality must be faced that without Christ and without His Grace, especially in a matter like the Prayer of the Heart, the human being can do very little – in fact almost nothing. 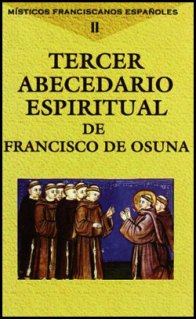