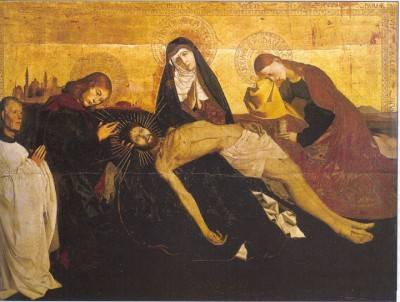 Conformity with Our Lady
“On the octave day of All Saints I spent two or three very troublesome days […] While I was at Matins that same night, the Lord, through an intellectual vision so intense it almost seemed to be an imaginative one, placed Himself in my arms as in the painting of the fifth agony. This vision caused me great fear. For it was so clear, and He was so close to me that I wondered if it was an illusion. He told me: “Don’t be surprised by this, for My Father is with your soul in an incomparably greater union.”
This vision has so remained up till now. What I said of our Lord lasted more than a month. Now it is gone. (St Teresa of Avila, Spiritual Testimonies, Seville 8th of November 1575)
By placing Himself in the arms of St Teresa, just as tradition represents Him in the hands of Our Lady in the descent from the cross (in fact the sixth sorrow of Our Lady), a real similarity between Our Lady of Compassion and St Teresa is established. We understand her fears of being deluded or misled. Herein we discover her supreme conformity with our Lady of Compassion, rarely given – it seems – with such supporting evidence in the entire history of the Church. Jesus has granted St. Teresa the grace of conformity to Our Lady’s life, leading her to the fullness of the Mystery of Our Lady. The last statement above could mean that this grace lasted an entire month, in which case this could be the longest Marian grace St Teresa received. Initially on 22nd of July 1572 St Teresa had requested the Lord to allow her to take the place of Mary Magdalen at the foot of the cross. Here Christ is giving her infinitely more…. the place of his mother.
St Teresa would not mention any other Marian grace after this one. Was it because this was unsurpassable? It is noteworthy that this grace was received three years after the grace of Spiritual Marriage, which rooted St Teresa in the Spiritual Maternity of Our Lady, in her compassion for Christ’s Body, dead as it was. Also, more trials would occur in her life, beginning a month later when she received the order from her superiors to stop founding more monasteries and to retire in one of them. At the same time the Inquisition paid a visit to Teresa in the Seville monastery after a denunciation by an ex-novice. It was the beginning of a great storm hitting her reformed order. Then too, St John of the Cross was kidnapped and imprisoned. To make matters worse, the discalced had now to submit to the orders of the Calced Carmelites. In a word, her entire new world, in one fell swoop, seemed to collapse – Teresa was certainly living her ‘motherhood’ in a painful way. Being the woman she was at that junction however, she would show a great deal of patience and strength, moving heaven and earth in order to save her reform and fulfil her God-given mission. This mission would be almost completed at the Chapter at Alcalà (beginning of March 1581) that consecrated the autonomy of her Reformation. During this month, echoing some words heard interiorly in 1572 (see below), Teresa said: I can speak like Simeon, because I saw in the Order of Our Lady the realisation of what I wished (Letter 361, March 1581).
On another day the Lord told me this: “Do you think, daughter, that merit lies in enjoyment? No, rather it lies in working and suffering and loving. Haven’t you heard that St. Paul rejoiced in heavenly joys only once and that he suffered often. Look at my whole life filled with suffering, and only in the incident on Mount Tabor do you hear about my joy. When you see My Mother holding Me in her arms, don’t think she enjoyed those consolations without heavy torment. From the time Simeon spoke those words to her, My Father gave her clear light to see what I was to suffer. The great saints who lived in deserts, since they were guided by God, performed severe penances; and besides this, they waged great battle with the devil and with themselves. They spent long periods without any spiritual consolation. Believe, daughter, that My Father gives greater trials to anyone whom He loves more; and love responds to these. How can I show you greater love than by desiring for you what I have desired for Myself? Behold these wounds, for your sufferings have never reached this point. Suffering is the way of truth. By this means you will help me weep over the loss of those who follow the way of the world, and you will understand that all your desires, cares, and thoughts must be employed in how to do the opposite.” (St Teresa of Avila, Spiritual Testimonies, Probably Avila, 1572)